The era of Assyrian rule begins to display an understanding for the fragility of life. Assyrians were known through their own documentation and texts as severely cruel. There are claims for leaving mountains tops dyed red with the blood of slaughtered enemies. The architecture of their own was primarily meant for the glorification of their kings for their victory over nations. The Assyrians had is down: the death of others leads to victory for their nation, and that they will not live forever individually, but if they fight, then their nation will live and prosper. This group values over individual values, I believe brought weight onto reproduction in order to carry on families and nations.

The Ishtar Gate was created as a processional route through the city in King Nebuchadnezzar’s time. This gate was named after the goddess of fertility, displaying the value on procreation–an attempt to carry on personal life in a greater attempt to carry on the life of the nation the fought so hard to build at the death of others. I like to think that the process of glazing used to finish these pieces was intentional to represent the resilience the people group strived for. To be able to withstand high heat, in any scenario, and only reap a seamless, smooth product.

I still feel like the fertility is overvalued in today’s church. While adoption has become a greater option for families, it is sadly seen as a “second choice” for when a mother is found to be infertile. When a family in my church adopted their first child, it was assumed that the wife was infertile. So many people had apologized to her for her circumstances, instead of rejoicing in the choice she made for her own life. People were silenced and uncomfortable when they found out the woman was not barren, and just felt a greater call to adoption. Adoption is a great way to carry on life by providing a quality, love-filled life and home to someone who might not have received that in an orphanage. I find it interesting how heavily marriage and family building is pressed on the church, especially when there are so many ministry opportunities for those called into singleness, simply because of the cost they come at. My original plan for my life was to never marry and live in Ethiopia as a doctor, the end. Then I met someone who completely changed everything around, and I’m so thankful for him and the role he plays in my life, but I also know that saying “yes” to him is saying “no” to dropping all of my family here to move to Ethiopia. I’m unable to participate in that cost because of something new I took up, that would’ve been easier to surrender in singleness.

Trying to stay close in the timeframe to my earlier discussed piece, I found myself most drawn to the Jericho Skulls. I’ve recently been interested in the amount of science work that goes into artistic processes.

We all have our own aesthetics, but when I first was glancing through the pictures of these skulls I thought:

“For all we know, this is just a lump of clay with seashells.”

I was proven rather, it is a lump of plaster with seashells.

It wasn’t until further reading that I was wildly impressed by these pieces. Each “lump” is actually a thick coat of plaster encasing the actual skull of various demographics. Each skull was first stuffed with dirt in order to battle the pressure war between the plaster and the ground it would be buried in. The seashells are one of the few ways the piece was ornated. Seashells for eyes, and sometimes painted on hair in order to make each skull identifiable as for the human it once belonged to.

A lot of thought, clearly went into the process at the time, from pressure being accounted for to decorative details, but the process most interesting to me now is the modern attempts to replicate who the skull belongs to. 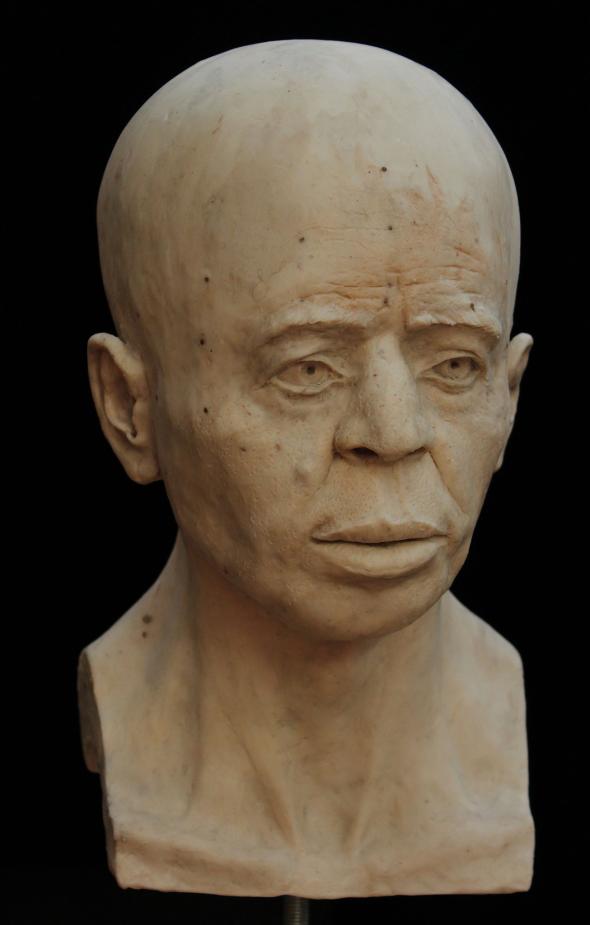 The facial reconstruction above was crafted through 3D printing. However, it could not have been done just based around the lumpy exterior form we all see. Scientists were challenged with the taxing task of–without damaging the piece–getting to the actual bones of the skull. X-raying was proven faulty as the piece shows up as an entire white lump due to the density of the plaster. A CT-scan was able to reveal some parts, and the rest had to be crafter virtually.

The final piece now reveals a portrait with astounding detail. The portrait was able to reveal things unique to that individual, also relaying information about the culture. The individual’s septum was broken, that could have occurred in process of death, or in the creative process of crafting the cast. We are also able to see binding from the skull, a cultural practice done at infancy, in order to craft a specific head shape.

Overall, I feel like this piece is an extraordinary way of preserving life after death, following our theme. Not only did the makers of the time find a way to preserve the remains of their loved ones and public figures as a way to honor the life that they lived in remembrance, but even so to this day, we are able to visualize the life that proceeded us. A mix of age-old preservation with modern day technology and we are able to look into the eyes that begin to tell the story of a life from ages ago.