I am so thankful I didn’t “peak” in high school. I peaked in middle school.

You might think that’s worse, but trust me, it’s not. You see I had all the affirmation of being cool when I needed it, but everyone forgot about that time by the time we hit high school. People are still “waiting” for me to peak. It’s like it never happened and there might be a second wave on the horizon of coolness. There’s probably not, but there could be.

I feel like maybe the Renaissance era would agree with me. As far as I’m concerned, being the crowning of human endeavor sounds a lot like an early “peak.” 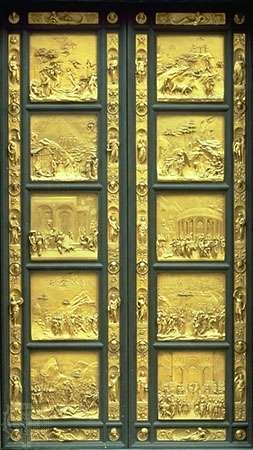 Ghiberti’s Gates of Paradise is an excellent example. This relief sculpture was cast in individual bronze reliefs and assembled to be the baptistry doors of Florence. The cohesive color of the bronze illuminates the light of God while the individual tiles tell the story of God’s hand in history. The repetition of the module also opens space for unity and variety throughout the sculpture. The unifying, repeating square shape with a variance of the detail inscribed creates a cohesive feeling. The scale of the piece is hard to see in a textbook or computer, but the multiplying magnitude of the smaller squares adding to the large doors is overwhelming. This piece overall does a highly effective job of being complete, bold, and detailed.

I would not say we are fully immersed in a time of Renaissance, or re-birth, but I do believe that it is on the horizon and that people see that we are in need of one. I would first say that technology needs a re-birth. Technology, since the early 200s has progressed far more exponentially than our minds can really keep up with. Already I see people uncomfortable with how fast we’ve been moving, especially with CRISPR technology for example. CRISPR technology gives us the ability to cut out and rewrite our DNA. This could be used to grow plants that build a home on their own, demolishing the construction industry. CRISPR is more known for what it can do in healthcare, eliminating genetic diseases from unborn babies, but also potentially making way for people with the money to create their own “designer baby.”

I also see a need for a re-birth in the view of art in culture. I think a lot of times art is seen purely for its aesthetic value, and nothing else. I think it would be really effective for the overall wellness and also educational system if art was of higher reverence. Art could be used for more than aesthetic value, but also for the development of communication and effectiveness in learning processes.